Hospitals are not fun.

So I have to say sorry again for such a long delay between posts. Unfortunately I continued to not be able to eat and on Wednesday began to throw up anything I tried to eat.


By Thursday night my stomach was in immense pain, I hadn't eaten since Saturday, I hadn't slept in two days, and I begged Dan to drive me to the E.R. (Editor's Note:  I didn't make her wait that long)

After an x-ray that didn't show enough and a CT scan that showed everything was pretty normal and A LOT of pain and anti-nausea meds I could finally sit still.


Before they gave me pain meds I was rocking back and forth in pain, not able to sit still due to my insides feeling like they were burning through my stomach wall. (Sorry, just thought I could give you a taste to what I was feeling)


After I was finally relaxed and sleeping and ready to go back home since nothing looked wrong and I could finally sleep and possibly eat, they stopped me. The doctors had done some blood tests and they came back very "off". My liver functions were through the roof which could be from the chemo and my white blood cell count was really really low which was definitively from chemo.


They had to admit me.


By now it was 6am on Friday and Dan had to go to a gig in Charleston for the day. He called his mom to hang out with me till we figured out where my room would be.


I was doped outta my mind and didn't care where I was as long as everyone would just let me sleep.


I got to my room and called my mom to let her know what was going on. I am afraid I didn't make much sense on the phone and may have scared her a little. Luckily she quickly called Dan and figured out what was going on.


I felt so good after I woke up from the drugs that I ate breakfast and then even lunch!


By Saturday though I realized I was still going to need some pain meds and took it a little easier.


By Sunday I was completely off all the meds and I was ready to go home. Nope. My white blood cell count numbers had actually dropped. 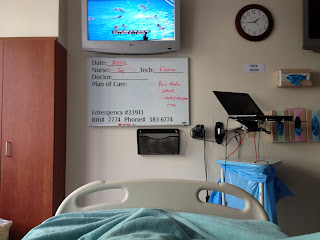 My view since Friday morning. At least they have cable!

So right now they are giving me shots in my hips to help produce more bone marrow which helps produce more white blood cells. That is all they can do right now and I am not allowed to go home until my numbers are back past .5.


We knew that my white blood cell count numbers would get really low, but we didn't expect to worry about my immunity system being gone until school started. It was just by chance that I happened to go the ER that night and happened to get blood work done.

I don't feel bad, at least not anymore. I wish I was home, but I know my parents as well as Dan can relax knowing I am being taken well care of. I wish I could have gone to Indy this weekend and found a wig, but I still have 10 days before school starts and probably around 5 days before my hair falls out, so I have some time.


I actually feel more comfortable too. I was scared on Thursday night that something was really wrong and I didn't know what to do. Now I know this is all part of the fun ride of chemo.

I just really wish I had a few "normal" days before my second chemo happens on Wednesday.


I am wearing my new t-shirt though! 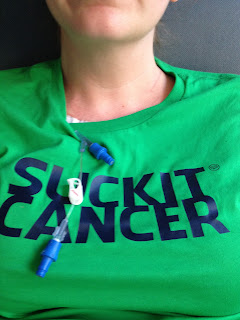